When Eric opened his shop, I was among his new neighbours. There were several of us who arrived in Pont-Croix on the “Place de l’église”, without knowing each other, at the end of the Millenium. Curiosity, friendliness, growing friendship.

A potter, an artisan who settles down in a village, without having been asked to do so, on the verge of the year 2000 is a bit of a challenge. A challenge and an encouragement to those who want to do as they wish, who prefer to work on their own, at their own rythmn. But one has to earn a living, confront the doubts, the difficulties and the hazards of the job. It is not a game.

Go into the shop on your way to the market, step in after having looked at the exposed objects on the other side of the counter that separates the shop and the workshop. Cast a glance at the brushes and the little paint pots. There is the wheel at the bottom, in front of the old fireplace, there are a few steps that lead up to the kiln and the drying space. The potter evolves from one area to another like a choreography orchestrated by this small space: take the clay, beat it, mould it, go up, put it in the kiln, go down, hold on a gesture, put on the enamel. Becoming familiar with the show of the ball of clay that goes up and down and up again, making a hole, looking at the appearing shape. Follow the steps of making the pieces, before firing, before decorating, ask questions. The black, white, red blocks of clay are waiting on the ground. A bowl of water to dip your fingers in before you turn.

The shop is filled with vivid colour objects, with simple motives, lines,spots, stains, circles going into each other, curves, leaves...new motives appear with new seasons, some persist, disappear for a while and come back. There is the one with the writing: all through the year, the potter writes in the clay on his objects the name of places, poem extracts, some phrases of Maeterlinck about bees, extracts from Alexandre Dumas cooking book. Through time, the shapes have diversified as well: tiles, goblets, candle holders...

In a society where nearly everything is mass produced, it is a luxury to come to a place where you never see two objects the same. These simple utilitarian objects pass , they dont stay long on the shelves, you regret them and there again they are replaced by others that you like just as much.

If we were in an African village: this is where we would come to buy utensils. Here you buy an object for the pleasure. But it is made to be useful and will be as pleasant to look at as a detail from a Matisse painting. All through the year in the shop window, on wooden shelves inside, the rejoicing spectacle of potteries with harmonious shapes, bright colours and motives pleasing to the eye. You can touch.

The clientele is both local and touristic, not being both distinct one from one another.

Eric works in front of you but if you want to discuss he is at your disposal. He is curious and welcoming, he knows his clients, he likes to know where his pottery is going, sometimes people send him photographs, it is an exchange, a two ways system, people come back from one year to another to discover the new objects and perfect their collection.

This sedentary activity is completed by a travelling one. In the autumn, once the intense rythmn of the season is over, the potter goes away for a long trip that he has prepared in the dreams of his workshop. He forgets everything, he says, of what preoccupies him when he is in Pont-Croix. In this process: colours , countrysides, encounters, all the sensations that will influence him are found in the new season that starts around Christmas time. 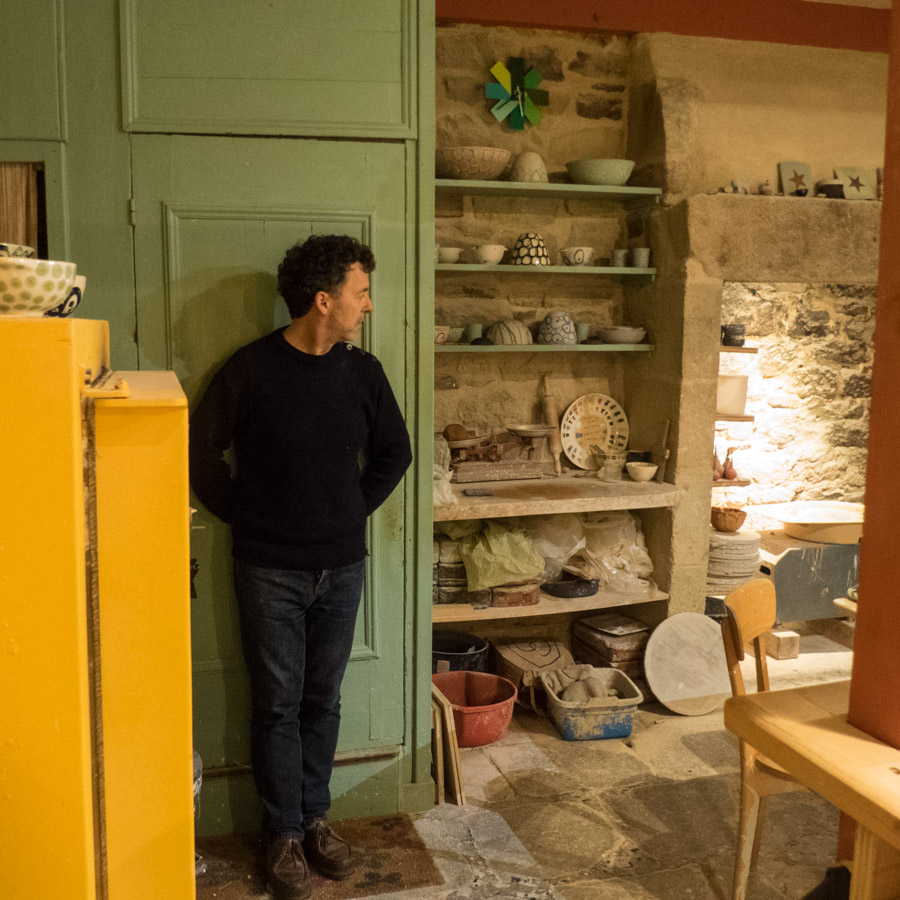